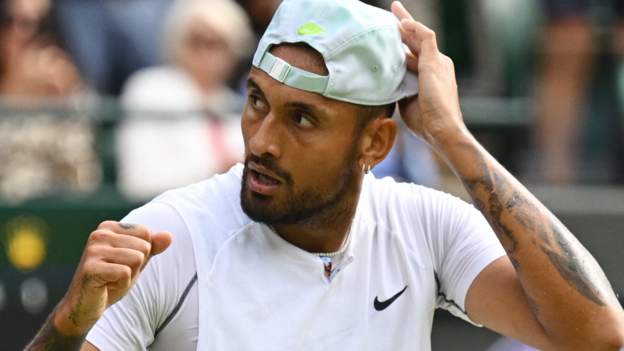 Nick Kyrgios reached his Grand Slam singles semi-finals with a back-to-back victory over Christian Garin of Chile at Wimbledon.

Having reached his second Wimbledon quarter-final eight years after his first match, the 27-year-old put in a solid performance to get ahead.

He will face either Spanish second seed Rafael Nadal or American Taylor Fritz.

Kyrgios fell on his back, his arms outstretched, as a missed shot from Garen confirmed his place in the final four.

“I never thought I’d be in the semi-finals of the Grand Slam,” Kyrgios said.

“I thought the ship had set sail—maybe I’d miss that window on my career.”

Garin, 26, put in a superb performance in the previous round to defeat another Australian, Alex de Minaur, but was unable to turn Kyrgios away at the crucial moments.

The result came one day after the confirmation of Kyrgios’ will appear in court in Australia next month regarding a public assault allegation.

Kyrgios serves the road to victory

Well received by the crowd on first court, Kyrgios did well when it mattered most, saving eight of the nine break points he faced, hitting 17 aces and winning 73% of points on his first serve.

The pair’s start started slower, and love was broken in the first match of the match by a player who came back from two sets in the previous round.

Having caught between blaming the penalty area too often and not getting enough support, Kyrgios settled enough to break his serve and save two serving chances at 4-4.

A crippling forehand from Garin handed his opponent the first set and Kyrgios dug himself out of a hole in the opening game of the second game, pulling back 40-15 to tie before catching.

However, a superb net move and a foul by Garin gave Kyrgios a first-half lead 3-1, with two big serves in the next game helping to keep the Chilean away.

The ace made the bottom T the second set with increasingly crowded participation. The Australian was unhappy with some noise from the crowd, with referee James Keothavong several times asking for calm during the rallies.

It was inevitable that a tight third set would head into the tiebreak, as Kyrgios took it there with three impressive air balls on the net.

Despite the unfortunate overtaking on match point, with Kyrgios’ return called before being patched, he held steady to seal the win at 2 hours 13 minutes.

“I felt like I was playing on the back foot a lot,” Kyrgios added. “Garren is a hell of a player.”

“I got lucky with my two break points, so I’ll take that and prepare for my next game.”