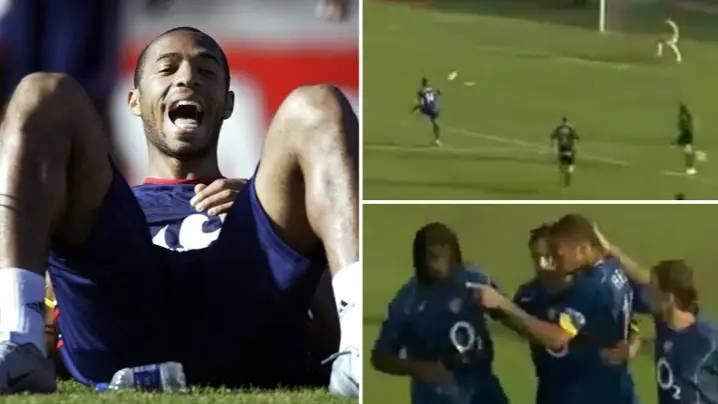 On July 20, 2005, a new captain Thierry Henry He produced his most controversial moments in Arsenal A shirt when he scored one of the best pre-season goals in a friendly match against Austrian SC Weiz.

Arsenal won five goals against the fourth-tier side, with goals from Matteo Flamini, David Bentley and Dennis Bergkamp and a double from that man Henry to secure a sure win as Arsene Wenger geared up for the upcoming Premier League season.

It was a relatively straight draw but one of Henry’s hits was a far cry from that.

On that day, around 2,500 fans inside the Siemens Power Stadium witnessed an unforgettable feat from one of the world’s best strikers. Are you ready for this?

The sequence begins when central defender Philippe Senderos throws a perfectly heavy ball to the French player, who then controls the pass with his thigh, hits the ball over the defender’s head with his right shoe and hits the ball with his left hand.

Henry proceeds to walk away as if he had just completed a five-yard pass as his teammates celebrated with a superb shot.

Thierry Henry’s 2005 pre-season showing for Arsenal at Wise has to be there in terms of distance sent by the opponent in the wrong direction. pic.twitter.com/k8R188vGvb

Henry scored an impressive 228 goals during his time in North London and would go on to be rated as one of the club’s greatest players alongside the likes of Ian Wright, Patrick Vieira and Tony Adams.

There is no doubting the Frenchman’s impact in the Premier League after his £11m move from Juventus in August 1999.

To this day, Henry is the only player to have won the FWA Footballer of the Year award three times and is often described as the best striker in the Premier League ever.

Titi: The perfect combination of physical and technical samples on which attackers are designed. pic.twitter.com/CChPDnILEC

Do you think Henry’s goal against SC Fayez is his greatest goal in an Arsenal shirt? If not, what is the point?

Let us know in the comments. We don’t think you’ll be able to name a better pre-season goal, to be honest.