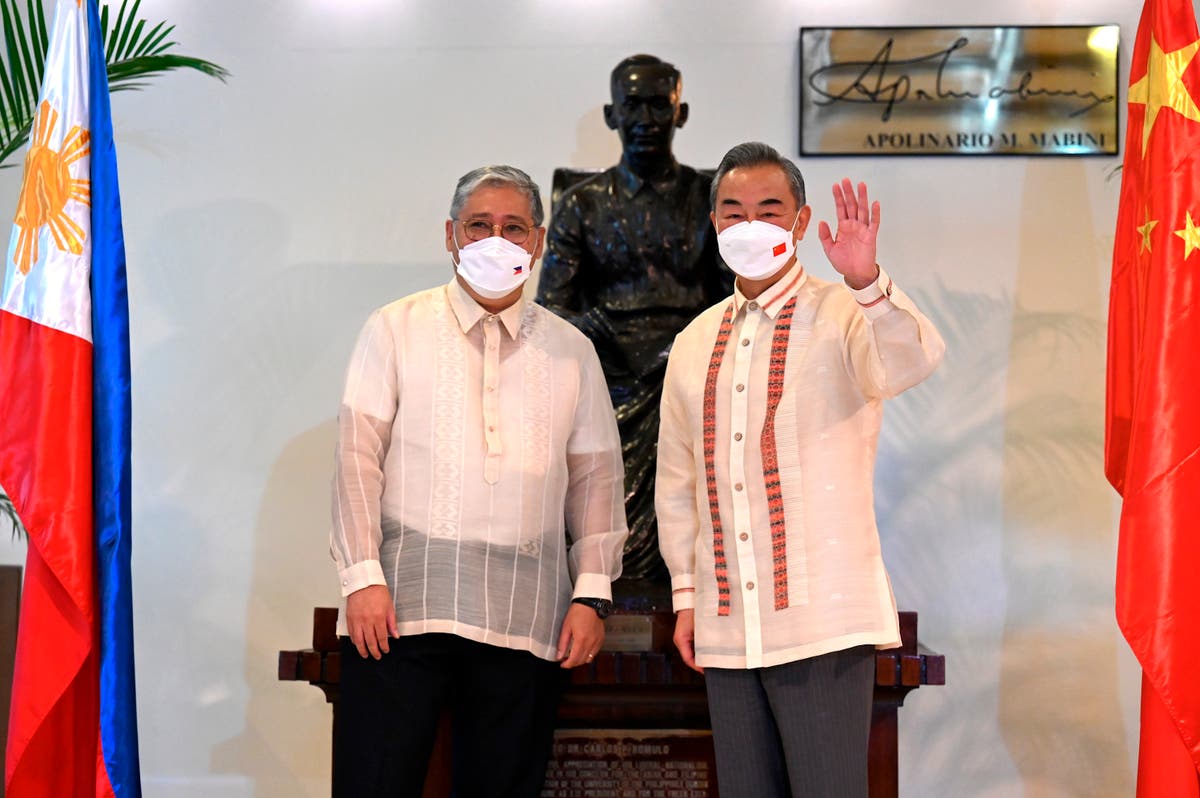 New Philippine President Ferdinand Marcos Jr. will meet with China’s top diplomat on Wednesday to discuss long-running disputes in the South China Sea, as he delves into foreign policy dilemmas that include the rivalry between the United States and China in the region.

Wearing the original Filipino official shirt, Chinese Foreign Minister Wang Yi met his counterpart for talks at the Ministry of Foreign Affairs in Manila. A Philippine official said he was scheduled to meet Marcos Jr. later at the presidential palace and extend an invitation from Chinese President Xi Jinping to visit Beijing.

Wang arrived in Manila on Tuesday night as part of a Southeast Asia tour that took him earlier to Myanmar and Thailand. He will also visit Malaysia and Indonesia, where he will attend the G20 foreign ministers meeting in Bali.

Wang’s visit to Marcos Jr. opened early on the sensitive foreign diplomacy issues that often prompted his predecessors to make delicate balancing act. Marcos Jr. was sworn in last week after his landslide electoral victory in May.

He said in a televised news conference Tuesday that he would discuss with Wang possible ways to resolve Manila’s disputes with Beijing in the disputed South China Sea, but would also suggest expanding relations further.

“Not only should China and the Philippines discuss the West Philippine Sea,” Marcos said, using the Philippine name for the disputed waters. “Let’s do other things too. In this way, it will normalize our relationship.”

“We have several proposals for them in the sense that, as I said, we would like to increase the scope,” he said, noting the potential expansion of cultural, educational, and military exchanges.

He did not say how he would deal with regional issues but indicated that he would generally follow the approach of his predecessor, Rodrigo Duterte, who focused on intensifying relations with China.

After taking office in 2016, Duterte set differences on the back burner and tried to bolster ties with China. He has ignored calls to forcefully demand that Beijing comply with a landmark 2016 ruling by a UN-backed arbitration court that invalidated China’s extensive claims in the South China Sea on historical grounds. The court also ruled that China’s massive land reclamation and actions against Filipino fishermen in the disputed shallow waters violated the 1982 United Nations Convention on the Law of the Sea.

China refused to participate in the arbitration, which was initiated by Duterte’s predecessor, the late Benigno Aquino III. Beijing continues to defy judgment, welcomed by the United States and other Western governments that have challenged China’s flexing muscles.

Nationalists and activists criticized Duterte’s stance as a “deception” that they said squandered the Philippines’ arbitration victory.

“If you’re talking about President Duterte’s policy of engagement with China, that’s really our only option,” Marcos Jr. told DZRH radio in January.

He said at the time that war was not an option, adding that China had refused arbitration “so that option is not available to us.” Bringing the United States into mediation, he said, would immediately make China your “enemy.”

Philippine Ambassador to Washington Jose Romualdez said Marcos Jr. was aware of the risks of rivalry between the United States and China and would strengthen relations with the two world powers in a way that would help the Philippine economy recover from and mitigate two years of the coronavirus pandemic shutdown. From the global impact of the Russian invasion of Ukraine.

“He always cites the saying that these two elephants and when they fight, they step on the grass. Romualdez said.

The initial dilemma will be which of the two capitals should Marcus Jr. visit first.

President Joe Biden sent a formal letter inviting him to Washington. Romualdez said that Wang is expected to convey Xi’s invitation to the new president to Beijing.

Marcus Jr. plans to attend the United Nations General Assembly in September, where he could have an initial meeting with Biden on the sidelines. Romualdez said a separate US state visit could be arranged in the near future.