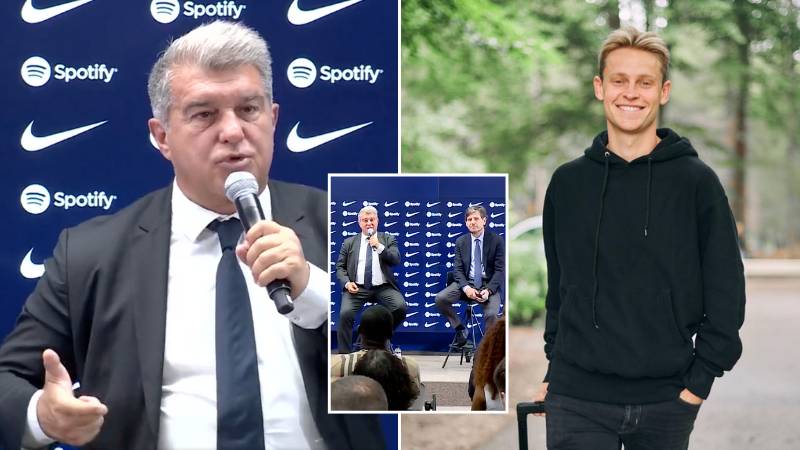 In fact, it was a move they wanted to finish by June 30 but after rejecting two offers – including one worth £56m – both clubs have yet to strike a deal.

And after weeks of speculation about De Jong’s future, it appears that no transfer will be agreed upon in the near future following Joan Laporta’s latest move.

During the unveiling of midfielder Frank Casey on Wednesday afternoon, the 60-year-old sent a clear message about the situation.

“Franke de Jong is a Barcelona player,” he said. We don’t want to sell it unless we have no other choice.

“Of course we know there are offers for De Jong,” he added. “But we don’t want to sell it.”

Earlier this week, Laporta again indicated that De Jong is not for sale amid interest from Manchester United and other clubs.

He said: “There are clubs who want him, not just United. We have no intention of selling him, he wants to stay.

“Frinki is considered one of the best midfielders in the world by all the experts. We are delighted to have him.

“I will do everything in my power to keep Frenkie here, but there is also a salary issue and that has to be adjusted.”

Despite Laporta’s public statements, the Spanish journalist Gerard Romero The Catalan club is believed to keep nearly £64m up front plus £10m in add-ons and bonuses.

Looks like this is going to be a long and extended saga this summer. One thing is for sure; De Jong is a huge fan of Erik ten Tag after he played a major role in Ajax’s success in 2019.

To put Ten Hag’s interest in perspective, the Dutch manager was, at one point, calling him “every day” to discuss a potential move to Old Trafford.

The midfielder was convinced after hearing the ambitious plans of his former manager, for example woman.