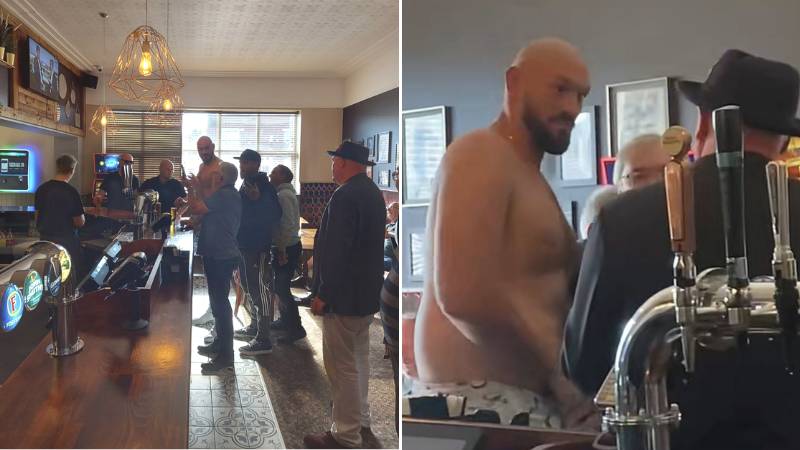 Few of the bar goers were dumbfounded when he was the world heavyweight champion Tyson Fury Walked into the Queen’s pub in to see For a quick drink and chat.

Locals said the 33-year-old fighter, who was in Liverpool as part of the ‘Fury Fest – The Official After Party Tour’, showed up to use the restroom.

But on his return, “The Gypsy King” appeared topless before ordering a pint of beer. Twitter user Tweet embed Post photos of Fury near the bar area.

After his brief appearance at the bar, a waiter at the Queen spoke to Liverpool Echo About their meeting with one of the greatest boxers of all time.

“He went unnoticed at first as he walked through the pub we weren’t busy, then I raised my head and saw Tyson Fury,” they said.

“I said to one of my colleges, ‘Is that Tyson Fury’” and his principal was told, “Yes it is.”

“Then he got out of the shower and started taking pictures with everyone who was there for just five minutes. He was originally in a suit but I think he took off the shirt because everyone had already noticed.”

Fury is known to have surprised bar-goers in years past.

Back in 2016, on a hot evening in Nice, France, the 6-foot-9-inch heavyweight champ was seen walking down a narrow cobbled street, with a handful of people on either side.

It was the night before England’s infamous defeat to Iceland in the European Championships, so Fury decided to lift the mood with a gift.

3 years anniversary Tweet embed Walking into a bar in Nice and getting 1000’s worth of jagerbombs for all of us! (Even if his card was rejected the first time)

For gamblers like Robin Evans, it will be an unforgettable evening.

“We were sitting outside when he entered the bar,” Evans told SPORTbible. Then he started asking people what they wanted and someone in the back shouted 200 Jägerbombs.

“He duly got them in, to great cheers. Those behind the bar had to go and get more bottles of Jäger outside because they didn’t have enough!”

Fury spent a total of €1,000 on Jägerbombs for attendees, and many also stood next to his huge frame for a picture.