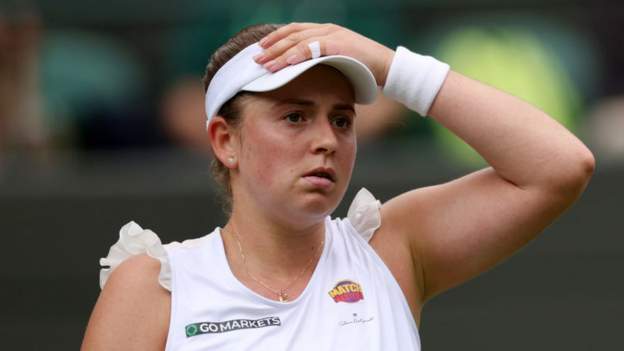 Jelena Ostapenko has been fined $10,000 (£8,400) for “unsportsmanlike behaviour” after her fourth-round defeat to Tatiana Maria at Wimbledon.

The Latvian champion, the 2017 French Open champion, knocked on her chair with a water bottle After a loss 5-7 7-5 7-5 Where he wasted two points of the match.

Ostapenko, 25, was booed when the 12th seed stormed the court after Sunday’s clash with the German.

The penalty is the biggest penalty handed at this year’s Wimbledon.

Nick Kyrgios and Stefanos Tsitsipas have both been fined the same amount due to previous incidents in the tournament.

Kyrgios is punished after confession Spitting in the direction of a spectator who was teasing him in his first round victory over Britain’s Paul Gibb.

Greek Tsitsipas received a fine for unsportsmanlike behavior during the third round match with Kyrgios, who was also fined an additional $4,000 (£3,300) for swearing in that match.