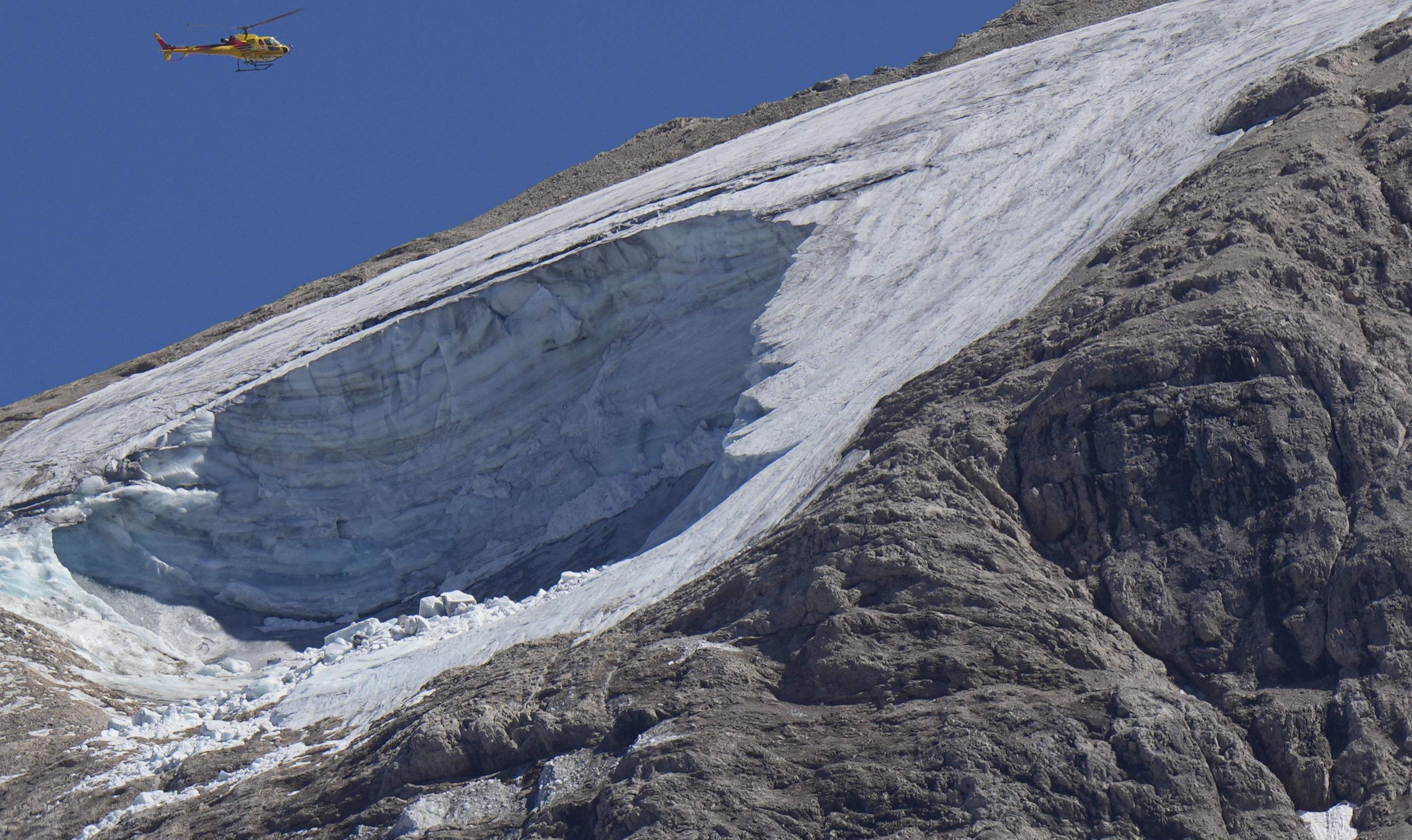 Italy was suffering from a prolonged heat wave before a massive glacier ruptured in the Alps, killing hikers on Sunday. Experts say climate change will make those hot, destabilizing conditions more common.

Seven hikers were killed and many others missing after large chunks of ice and rocks from the Marmolada Glacier were pushed down the mountain in an avalanche. Experts said that high temperatures combined with below-average winter snowfall were among the factors that may have triggered the event.

The exact role of climate change in specific events is complex and large chunks of ice can naturally cut off alpine glaciers. Climate change is leading to higher temperatures that can lead to more ice and melting ice, said Brian Menounos, a University of Northern British Columbia professor who researches climate change and glaciers.

“Glaciers are responding directly to a warmer climate, and a warmer planet,” Menounos said. “They can respond to long-term changes, but they can also respond to these extreme events,” such as heat waves.

The Marmolada glacier is located in the Dolomites, a series of steep and dramatic peaks in northeastern Italy. The region has already been altered by climate change. Between the late 19th and early 21st centuries, temperatures in the Alps increased twice as fast as the global average, according to Copernicus, the European climate model group. The United Nations has identified the Mediterranean basin that includes Italy as a climate change hotspot prone to heat waves. Glaciers are retreating all over Italy, the Alps, and across the world.

The government’s National Research Council said the Marmolada glacier has been shrinking for decades and may vanish within 25 to 30 years.

Before the avalanche, daytime temperatures on the glacier’s altitude were around 50 F (10 C) when they don’t usually rise above freezing. The long period of hot weather at high altitudes created a special set of conditions, said Tobias Bolch, a glacier researcher at the University of St Andrews in Scotland.

Pictures of the ice still part of the glacier tell a story about what likely happened, said Guglielmina Adele Diolaiuti, a professor at the University of Milan who studies glaciers.

The upper two-thirds of the icy face appears to be slightly dirty, indicating exposure to air.

“Obviously, this part of the vertical ice shelf was the interior of the rift,” she said. A rift is a deep opening in a glacier.

The bottom is blue, Diolaioti said, indicating that it is connected.

Water may have accumulated in the rift, adding weight and pressure to the glacier. Experts said he may have loosened the glacier’s grip on the steep rocks he was sitting on.

Richard Alley, a professor at Penn State who studies ice sheets, said anyone who’s tried to shovel ice off a cold lane knows they’re strapping themselves onto the sidewalk. But when the weather warms, the ice loosens its grip.

The hikers were probably quite surprised.

In addition to the heat, there has been less snow than usual this winter. Northern Italy is struggling through its worst drought in 70 years. When there is less snow, the ice is exposed and impurities can collect on the glacier’s surface, turning the surface a darker color that traps more heat. The extra heat is melting ice and snow faster, Bolch said in St. Andrews.

On Tuesday, rescue efforts revealed equipment and body parts. The sun reappeared on Tuesday after rain made rescue operations difficult on Monday.

According to Daniel Farinotti, professor of glaciology at ETH Zurich and WSL Birmensdorf, Switzerland, climate change may reduce the risks of some avalanches. Glaciers need cold weather and snowfall to grow. If the glaciers grow on a steep slope, the ice pushed over the edges can break off and cause avalanches. But he said that as temperatures rise, glaciers are retreating, and smaller glaciers create fewer risks.

Experts said that in the event of Sunday’s avalanche, melting snow and ice is the likely cause.

“Ice, snow, is very sensitive to rising temperatures, so we expect these types of events to increase in frequency and intensity in the future,” said Roberta Paranosio, who researches climate change at Italy’s National Research Council.

While some avalanches occur in isolated areas, the area around the Marmolada Glacier is popular with hikers.

The Associated Press receives support from the Walton Family Foundation to cover water and environmental policy. AP is solely responsible for all content. For all AP’s environmental coverage, visit https://apnews.com/hub/environment