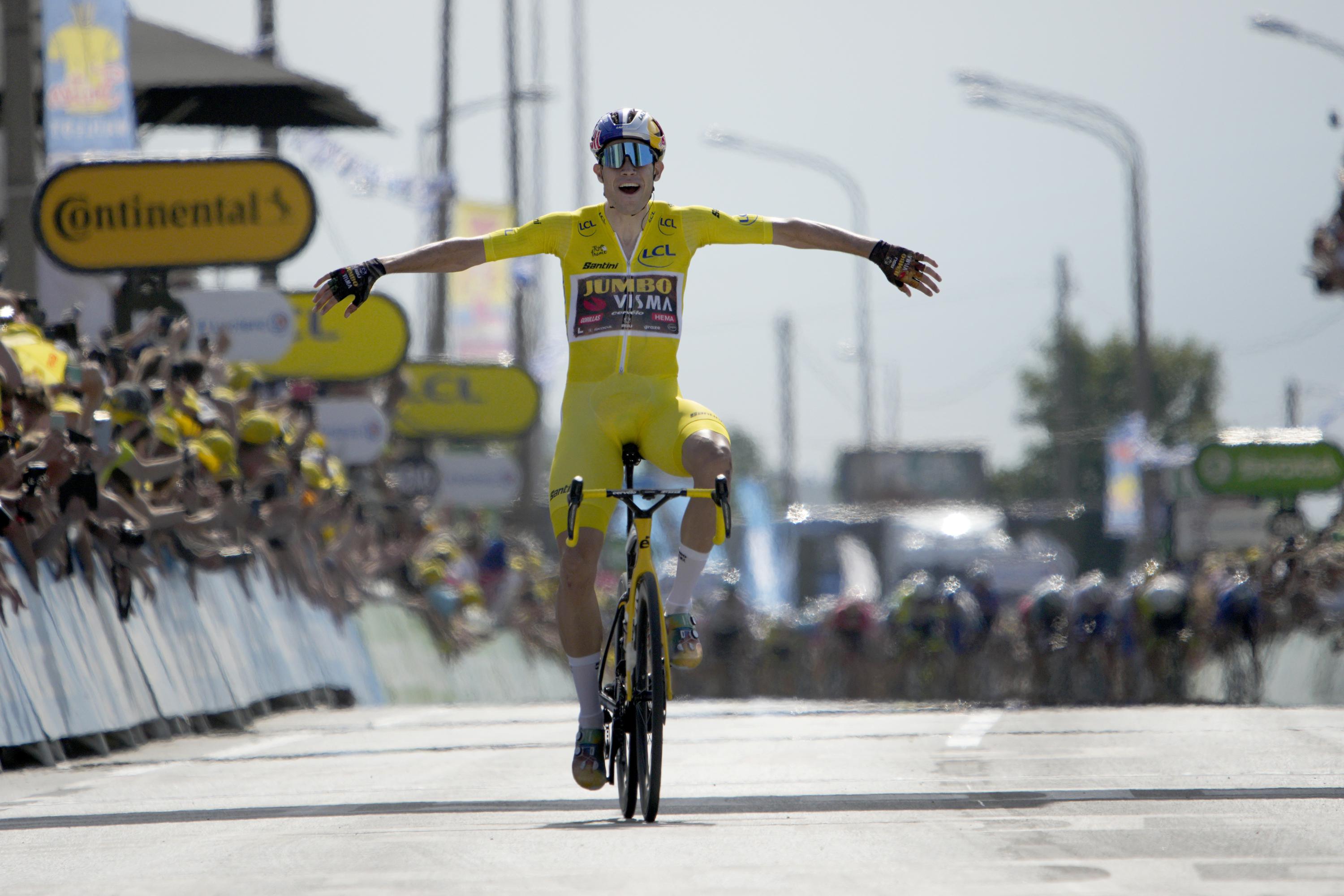 The Belgian rider retained the yellow leader of the Jumbo-Visma team after receiving it for the first time on Saturday. He also boosted his lead in the green jersey competition for best runner.

Van Aert shook the peloton as he climbed forward on the last of the five climbs – a 900-meter ascent over the Côte de Cap Blanc-Nez at a 7.5% incline – about 10 kilometers (6 miles) from the finish.

He said he felt that an early attack was the best way to avoid the mass enemy on the line.

“I didn’t want to risk losing anymore. It was clear we were trying something with the team.” I went in full gas to see what would happen. I’m all out.”

The 27-year-old is one of the world’s best multi-skilled riders and is a three-time former world champion in cyclocross and a specialist in the one-day classics.

The Jumbo-Visma rider fluttered his hands like the wings of a bird as he sat on his bike. He crossed the line by eight seconds over fellow Alpecin-Fenix’s Jasper Philipsen, with his Jumbo-Visma teammate Christophe Laporte finishing third in the sprint.

“This shirt gives wings. It was definitely a tough climb but this stage would most likely have ended in a sprint,” Van Aert said. “It was hard to finish on my own, but thanks to the work of my teammates, I did. It was up to me to finish it.”

Van Aert earned a 10sec bonus and is now 25sec ahead of Yves Lambert in the general standings, 32sec behind two-time champion Tadej Pogacar.

After a day’s travel, the riders made the 171.5-kilometre (106.3-mile) sunny route from the coastal town of Dunkirk to Calais, where passengers can see the English coast as they arrive at the port’s most-used location. Van Aert completed it in 4 hours 1 minute 36 seconds.

Danish rider Magnus Kurt, who wowed audiences with his breakaway ride during three intense days in Denmark, was once again at the start of the breakup – this time alongside Anthony Perez.

Perez moved forward 45 kilometers (28 miles) and Kurt was captured by Peloton shortly after. Kurt scored more points in the polka-shirt show, but the more difficult difficulties in the Alps and the Pyrenees were yet to come.

Wednesday’s fifth stage is a flat stage for runners over 157 kilometers (97 miles) from Lille Metropole and past some of the cobblestones seen in the one-day classic Paris-Roubaix.

The race ends on July 24 in Paris.