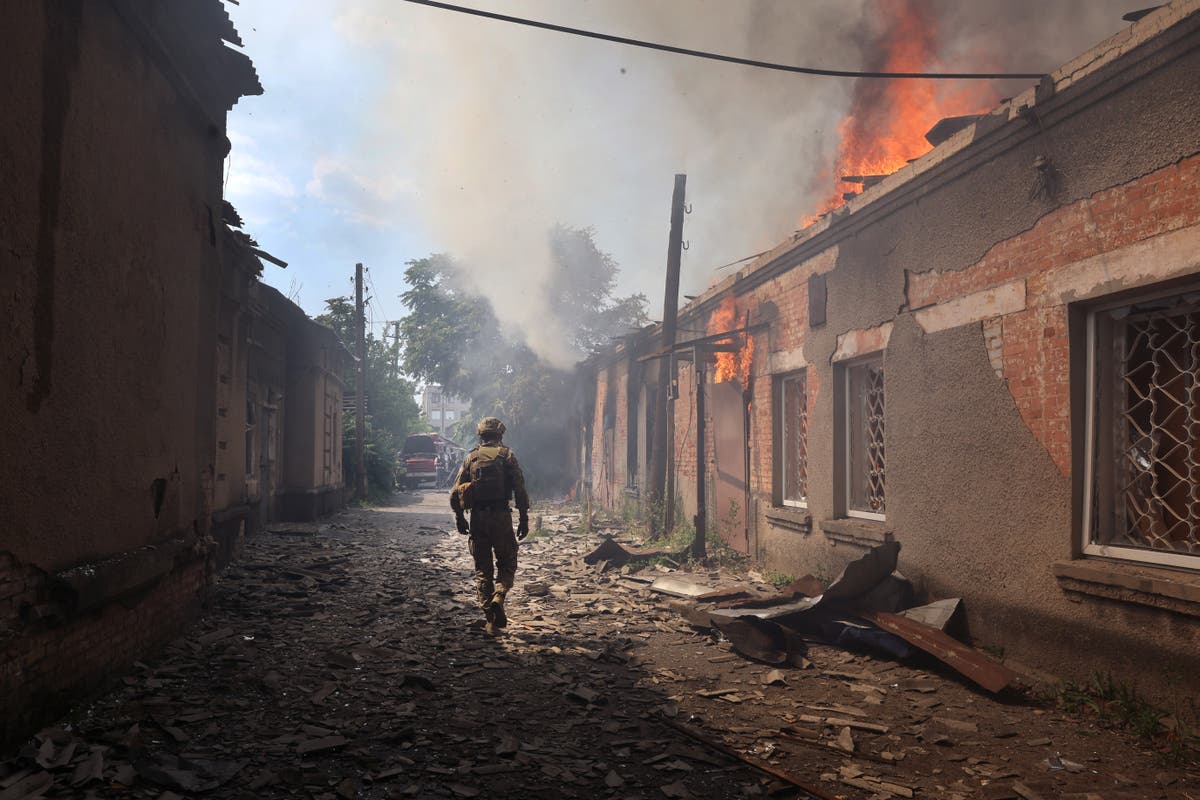 Boris Johnson accused Vladimir Putin of “using the language of nuclear blackmail” before suggesting that a solution to Ukraine’s grain embargo might not win Russian approval.

Conservative MP Tobias Ellwood, who chairs the Defense Committee, reiterated calls for the UK to secure a UN General Assembly resolution to create a “humanitarian safe haven” around the Odessa port to ensure “vital grain exports reach not only Europe but also Africa and prevent starvation there.” “.

In his response to the House of Commons, the prime minister said the United Nations was leading the action but that the solution “does not depend on Russian approval because that may not come.”

Meanwhile, the Russian president instructed his troops to proceed with the invasion of Ukraine after taking Luhansk.

In a televised meeting with Defense Minister Sergei Shoigu, Putin said that the forces involved in the operation to capture the Luhansk region should rest but that other military units should continue to fight.

The president also congratulated his forces on the “liberation” of eastern Ukraine, a milestone for Moscow in its military campaign in Ukraine.

Volodymyr Zelensky said that the Russian offensive continues to terrorize the borders of the besieged country in the east, but added that the situation has not seen any radical change.

The situation on the front line did not undergo significant changes during the day. “The enemy continues to terrorize the border regions of the Sumy region, the city of Kharkiv and the Donbass region,” Mr. Zelensky said in his evening address late Monday.

He added, “Ukrainian armed forces are responding, pressing and destroying the offensive capability of the occupiers day by day. We need to break it.”

“This is a difficult task, and it requires superhuman time and effort. But we have no alternative – it concerns our independence, our future, the fate of the entire Ukrainian people,” Mr. Zelensky said.

Ukraine raised its flag again over Snake Island in the Black Sea on Monday.

Military officials in Kyiv said the blue and yellow flags were raised after the withdrawal of Russian forces from the strategic location last week.

“The military operation has ended, and the territory (Snake Island) has been returned to the jurisdiction of Ukraine,” Natalia Homenyuk, a spokeswoman for the Southern Military Command of Ukraine, said at a press conference.

Ukraine claims to have expelled Russian forces after an artillery and missile attack.

The images show the damage left by a school in Kharkiv after it was destroyed in a violent missile attack.

Prime Minister Boris Johnson has suggested that the G7 are looking into the possibility of using the Danube to get grain out of Ukraine “in smaller quantities”.

His comments came in response to a question by Labor MP Stella Creasy asking the prime minister to confirm whether he was looking into breaching the Montreux Convention “on the greater powers of the Black Sea”.

“She’s right to bring that up,” Johnson said. “No, we’re not looking at that. There are alternative solutions that don’t involve British or other warships in the Black Sea.”

“Although it might involve a tougher approach, but what we’re also looking at is the possibility of using the rivers, using the Danube in particular, to try… using the railways to try to get the grain out in less quantity than we can do with a giant sea convoy across the Black Sea .

“So we’re looking at all possible options, including smaller packets of pills that come out this way.”

Opinion: Have EU sanctions hurt Russia since it invaded Ukraine? Here’s the truth

Crescent Penalties against Russia useful? Yes, they are already hitting Russian President Vladimir Putin and his associates severely, and their effects on the Russian economy will increase over timeWrites Josep Borrell Fontelles.

Since Russia deliberately violated international law by invading Ukraine, the European Union has adopted six packages of sanctions against Moscow. Our actions now target approximately 1,200 individuals and 98 entities in Russia as well as a large number of sectors of the Russian economy.

Some may ask, do these sanctions have a real impact on the Russian economy? The simple answer is yes. Although Russia exports a lot of raw materials, it also has no choice but to import many high value-added products that it does not manufacture. For all advanced technologies, it is 45 percent dependent on Europe and 21 percent on the United States, compared to just 11 percent on China.

Watch: Shelling of Ukrainian houses in the Sumy residential neighborhood

Shelling of Ukrainian houses in the residential district of Sumy

The United Kingdom will impose new economic and trade sanctions on Belarus for its support of Russia’s invasion of Ukraine.

The Foreign, Commonwealth and Development Department (FCDO) also said it had sanctioned six Russians who were spreading disinformation.

The Belarus package will include import and export bans on goods worth around £60 million, including exports of oil refining goods, high-tech components and luxury goods, and imports of Belarusian iron and steel.

“The Belarus regime actively facilitated Putin’s invasion, allowing Russia to use its territory to pinch Ukraine – by firing troops and missiles from its borders and flying Russian aircraft through its airspace,” the organization said in a statement.

Enemy Smoking: How Ukraine Uses E-Cigarettes to Fight a Drone War against Russia

Resourceful Ukrainians are using batteries from discarded e-cigarette pens as a way to power front-line drones. Bill Troy Reports from a laboratory in Kyiv where production began.

This video, which was posted on Facebook by the General Staff of the Ukrainian Armed Forces on Friday (July 1), is a black and white clip showing bombs falling on an island.

The allegations come just a day after Russia announced that it had withdrawn its forces from the island, also known as Zmini Island.

The commander-in-chief of the Ukrainian army, Valery Zaluzhny, said the bombs were launched over the island from Crimea.

Ukrainian officials shared footage of the moment they said the Russian military dropped phosphorous bombs on Snake Island. This video, which was posted on Facebook by the General Staff of the Ukrainian Armed Forces on Friday (July 1), is a black and white clip showing the bombs. The allegations come just a day after Russia announced it had withdrawn its forces from the island, also known as Zminy Island, and Ukrainian Army Commander-in-Chief Valery Zaloghny said the bombs were fired over the island from Crimea. Click here to sign up for our newsletter.

Westminster SNP leader Boris Johnson has called for support for efforts to get the grain out of Ukraine, telling the House of Commons on Monday afternoon: “This now is not just about stopping the war, it’s about stopping the famine as well.

Ian Blackford continued: “I am sure the Prime Minister would agree that all of these global efforts would begin and would only succeed if there was trust among world leaders.

“Can the Prime Minister thus explain that in this moment of many crises, how can breaking international law and threatening to start a trade war with neighbors abroad help anyone?”

Mr Johnson replied: “What countries around the world are seeing is that the UK is providing unwavering leadership in the matter of defending the rule of law and standing up against Putin’s aggression, and that is, I promise, that is what has been brought up with me.”