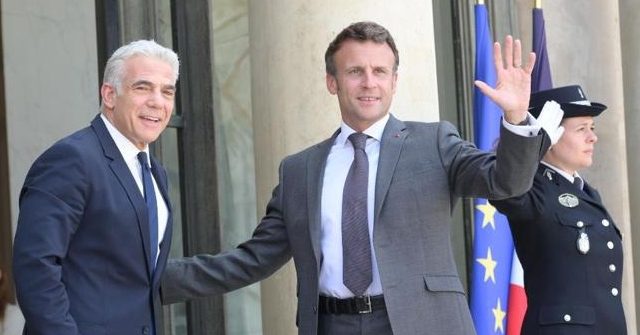 “In 2018, I was the first world leader to talk about the need for a new agreement with Iran,” Lapid said alongside the French leader in front of the Elysee presidential palace.

“You were right then, and you are more right today,” Lapid said, adding: “The current situation cannot continue as it is. It will lead to a nuclear arms race in the Middle East, which will threaten world peace.”

Recent efforts by world powers to revive the shattered Obama-led nuclear deal of 2015 have failed.

Macron was calmer in his remarks to Lapid, saying he still sticks to the deal.

“I would like to remind you once again of our desire to end negotiations on a return to respect for the JCPOA as soon as possible,” Macron said.

“We agree with Israel that this agreement will not be sufficient to contain Iran’s destabilizing activities, but I remain more convinced than ever that Iran that will be on the cusp of nuclear (energy) can carry out its activities in a more dangerous way,” he added. So we must defend this agreement.”

Washington’s envoy to Iran Robert Malley told NPR radio in an interview on Wednesday that the United States and its European partners in the deal were “concerned” about Iran’s accelerating rate of nuclear armament.

“They came very close to having fissile material to make a bomb,” Malley warned. As far as we know, they have not resumed the armament program, which they would need to develop the bomb. But of course we, as well as our partners, are concerned about the progress they have made in the field of enrichment.”

“At some point, the deal will be a thing of the past,” he added.

Israeli Defense Minister Benny Gantz said on Tuesday that Iranian warships patrolling the Red Sea represented the most important naval activity by Iran in more than a decade, and warned that they threaten global stability.

“Today, we can confirm that Iran is systematically establishing its bases in the Red Sea, with warships patrolling the southern region,” Gantz said at a round table meeting in Athens.

In recent months, we have identified the most significant Iranian military presence in the region in the past decade. It is a direct threat to trade, energy, and the global economy. It also poses a direct threat to peace and stability in the maritime domain, which could affect the Mediterranean and beyond.

He also spoke last week about a satellite launch pad from Iran’s Semnan province. This test shows that the Iranian regime has the ability to develop ICBMs that could reach central Europe. This is in addition to operational ballistic systems and drones that can already reach the eastern Mediterranean.