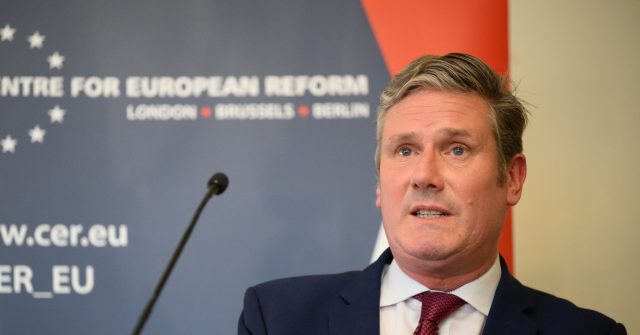 Despite calls from within his own party, Labor leader Keir Starmer has vowed he will not push Britain to join the European Union’s single market.

Sir Keir Starmer, the leader of Britain’s left-wing globalist Labor Party, appears to have waved the white flag at Brexit, emphatically obligated to keep Britain out of the EU and its single market if elected.

Starmer’s commitment comes as hard-liners seem to remain prominent within his party, with Labor Mayor of London Sadiq Khan proposing only last week that the UK push to join the European Customs Union.

However, according to Report by WatchmanStarmer rejected outright such an invitation, saying that any push to reintegrate Britain back into the European fold would ultimately be a look back, politically speaking.

Moreover, Starmer appears to have embraced the Conservative Party’s rhetoric of wanting to “cut the red tape” with Brexit, with the party chairman attacking Prime Minister Boris Johnson for creating a “bureaucracy” through the Brexit deal, and that he He undermined the country’s relationship with foreign powers as a result of his foreign policy decisions.

He claimed that “the work will change that.” We will be the honest broker that our country needs. We will make the protocol work and we will make it a stepping stone to securing a better deal for the British people.”

While some undoubtedly see Starmer trying to finally position Brexit as a pragmatic and wise move that would help convince the party of nationalist elements among the UK working class, it remains unclear whether the remaining hardliners within the left-wing political group They will tolerate compromise.

For example, hardline progressive and pro-EU politician Sadiq Khan, a senior Labor politician currently serving as mayor of London, expressed only last week that the party should actively campaign for a return to the EU’s single market.

Furthermore, Khan described the UK’s decision to leave the transnational bloc as “the biggest bit of self-harm ever done to any country”.

Khan’s position appears to betray the possibility that internal attitudes in the Labor Party have not changed since 2021, when a senior politician from within the party admitted that most MPs were “desperate” to join the EU.

Rosie Duffield, the attorney general, said last year, “All the groups I’ve been in are calling themselves ‘Rejoin’. They’re starting to think about it. I think, maybe it’s a little early, but we might as well start building a movement.”

“We’d still be desperate to rejoin if we could, I think, in the heart,” she continued.