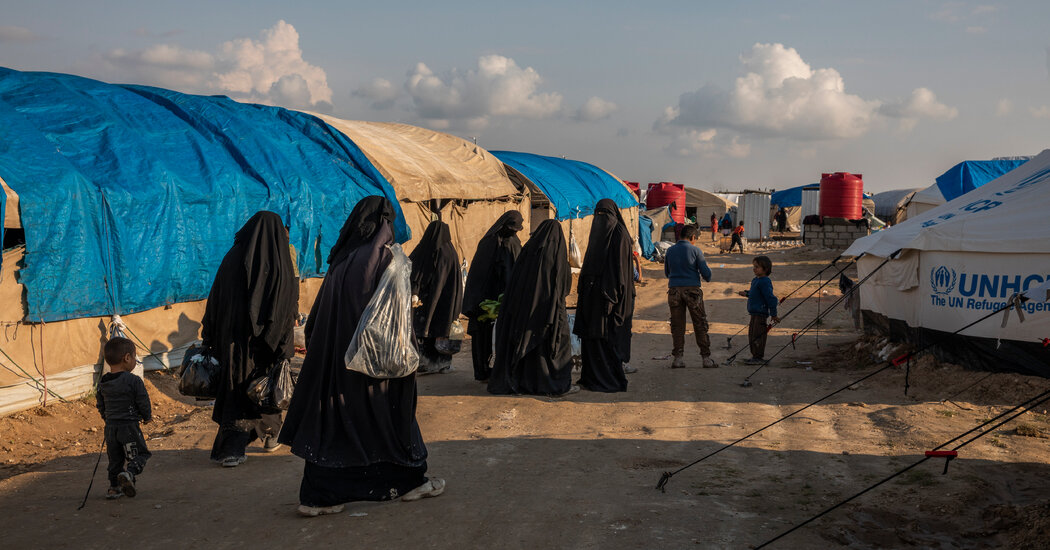 France on Tuesday repatriated 16 wives of jihadists from sprawling detention camps in northeastern Syria, in breach of a policy that for years has ruled out the repatriation and trial of adult women who left to join Islamic State.

The women accompanied 35 children – some traveling with their mothers, others orphans – in the largest group repatriated at once by France, as the government responded to mounting pressure to change its approach.

France has long resisted calls by rights groups and security experts to return the adult women, saying it considers them “combatants” who should be tried where they are accused of crimes, in Syria and Iraq.

Even when such domestic trials proved impossible, France stood by and refused to return not only adults but most children, returning only a few dozen over three years, with a piecemeal approach that contrasted with most of its cases. European neighbors.

French Ministry of Foreign Affairs He said in a statement On Tuesday, the children were taken care of by the welfare services and the mothers were handed over to judicial authorities. The authorities said the women – all of them are French, except for two who have French children It is expected that charges related to joining the Islamic State will be brought.

“It’s a sweeping change of policy,” said Mark Lopez, the stepfather of a woman still detained with her four children in one of the camps.

“I hope others will follow this summer, because there is no reason to allow a situation to run for years,” he added, referring to the French nationals still in the camps.

International organizations, including the United Nations, along with lawyers and politicians, urged France to rethink its approach, noting the deteriorating living and security conditions in the camps.

On Tuesday, Julien Audol, MP and spokesperson for the National Rally, Marine Le Pen’s far-right party, said, Posted on social media About repatriations. “Returning them to France is a crime against the security of our people,” he wrote.

The lasting impact of the civil war in Syria

After a decade of fighting, many Syrians are wondering if their country can be reunited.

Some 165 children and 65 women of French nationality are still stuck in the fetid and disease-ridden concentration camps run by Kurdish forces in northeastern Syria, where they live in a state of legal stalemate.

More than 1,000 European nationals have been repatriated since 2019, when the Islamic State group lost its last foothold in Syria, said Letta Tyler, senior counterterrorism researcher at Human Rights Watch.

Repatriations in other European countries have accelerated since the start of the year, acknowledging the dire security and living situation in the camps, with countries such as Belgium and Germany repatriating more than 90 children and their mothers.

By contrast, France has not taken back any of its citizens since January 2021, after taking a case-by-case approach to limit the return of orphans and children whose mothers had agreed to let them go.

French authorities have long said that adult women should be tried in Syria or Iraq. But their experience locally has proven impossible – the Iraqi government has ruled out doing so, and the Kurdish administration holding them in Syria is not internationally recognized.

The return of 16 women, aged 22 to 39, on Tuesday indicated that France is now ready to take a different approach.

Ms Tyler, of Human Rights Watch, urged the country to return all its citizens and prosecute them as appropriate. “It certainly can provide due process for women who have already said they are willing to serve a prison sentence if they are sent home,” she said.

“The French position has become absurd, dangerous and untenable,” said Ludovic Rivier, a lawyer for a woman who was sent home on Tuesday.

Living conditions in the Kurdish-run camps have deteriorated sharply over the months, adding to the urgency of repatriations and prompting the UN Committee on the Rights of the Child to criticize France.

The committee said that “France has violated the rights of French children detained for years.” He said in a statement “Children are living in inhumane sanitary conditions, lacking basic necessities including water, food and health care, and are at imminent risk of death,” he added in February.

perpetual struggle. The Syrian war began 11 years ago with a peaceful uprising against the government and turned into a multi-sided conflict involving armed rebels, jihadists and others. Here’s what you need to know:

assets. The conflict began in 2011 when Syrians rose up peacefully against the government of President Bashar al-Assad. The protests were met with violent repression, while communities took up arms to defend themselves. A civil war broke out.

Last year, about 10 French women went on a hunger strike in Roj camp in northeastern Syria, where most European families have been held, to protest poor living conditions and France’s refusal to repatriate them for trial.

A few months later, another French woman, also being held in Rouge, died of health complications, despite her lawyer’s repeated pleas to the French authorities to bring her back for treatment for severe diabetes.

She left behind a 6-year-old daughter who was among those sent back to France on Tuesday, according to United Families, a group of families fighting for repatriation.

Most security experts and rights groups have argued that leaving European citizens in the camps carries a greater risk than repatriating them, as they may join the Islamic State in the region.

In January, ISIS fighters attacked a prison in northeastern Syria in an operation that Kurdish officials said was aimed at releasing jihadist prisoners before going ahead with a bid to take control of nearby areas, including the al-Hol camp, where hundreds of relatives of Islamic State fighters are located. . detained. Kurdish-led forces retook full control of the prison after a 10-day battle, thwarting the militants’ broader operation.

Given the trauma linked to terrorism in France, returning Islamic State families en masse carries political risks that Macron has long seemed unwilling to take. His government’s move last year to tighten its legislation against Islamic extremism seemed to indicate a hardening of this position.

In early 2019, a plan to repatriate at least 160 citizens, including adults, was called off at the last minute. Officials said conditions in the camp had become extremely volatile, but lawyers and rights groups said the French government was aborted out of fear of negative political consequences.

While repatriation efforts were underway Monday morning in Roj camp, near the border with Turkey, a French woman in detention, who was asked by her lawyer, Mr. Riviere, to remain anonymous for safety reasons, said she was more optimistic.

In audio messages sent to the New York Times, the woman said local authorities first focused on identifying French orphans to return. But she said they also told some mothers, to their surprise, that they might be leaving soon, too.

“It gives me some hope,” said the woman.

On Tuesday morning, she was in France.