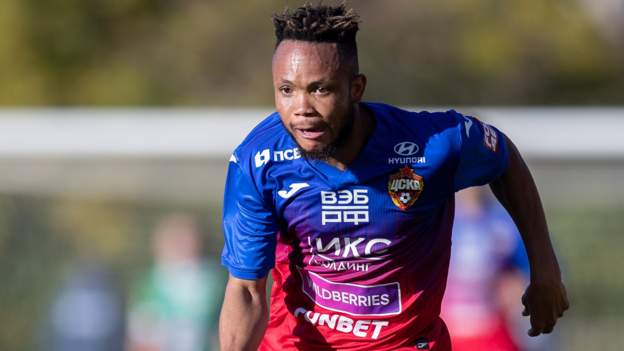 Nigeria international Chidira Ijok has become the latest African footballer to leave the Russian Premier League due to the ongoing Russian invasion of Ukraine.

Ejuke, whose deal expires at the end of June 2024, has scored 10 goals and provided eight assists in 65 matches for CSKA Moscow since joining from Dutch club Heerenveen in 2020.

One of Ejuke’s advisors said the move had been taken to advance his career, but then declined to comment on reports that Super Eagles were set to join a German club on loan.

“It was an important decision for Ejok to go to a place where he can continue to make progress in his career,” the consultant told BBC Sport Africa.

“He started well in the national team but has since fallen back from the criticism rankings and been ignored by the new Nigeria coach.

“If he moves somewhere and plays regularly, we hope he will return to the national team and continue his development.”

Ijoki has been capped eight times for Nigeria since his first friendly match for Tunisia in October 2020, and has made two appearances in this year’s Africa Cup of Nations with the Eagles exiting the Round of 16.

However, the three-time African champion EGOK was overlooked in the first leg of the 2022 World Cup against Ghana in March and New coach, Jose Pesero He did not choose him in the first two 2023 Nations Cup qualifiers.

CSKA Moscow confirmed the EGOC deal had been suspended, but added that it planned to “defend its interests against the FIFA decision”, which the 13-times champions consider “discriminatory and contrary” to FIFA laws.

Last March, FIFA announced that foreign football players playing in Russia could suspend their contracts and leave the country temporarily.

This step came after the Russian clubs and national teams Suspended from all competitions “until further notice” by FIFA and UEFA.

Find the latest football transfers on our dedicated page.