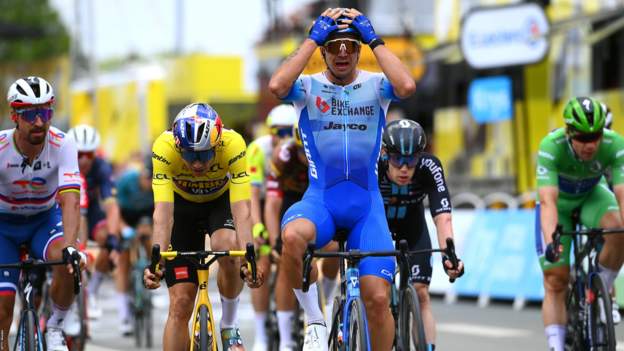 Dylan Groenwegen snatched victory in a thrilling final photo of the third stage of this year’s Tour de France.

Wut van Aert took the lead when he sprinted into Sonderborg, but the 29-year-old Dutch rider Groenwegen took a late rise to claim his sixth win of the round.

This 182 kilometer flat culminated from Vejle and it was the third day in a row that Belgian Van Aert, 27, had to take second place.

But he maintains the overall lead after the opening stages in Denmark.

Groenewegen’s victory also prevented Quick-Step Alpha Vinyl from becoming the first team to win the first three stages of the Tour, after Lambert won the first stage And the Fabio Jacobsen wins the second stage on Saturday.

Dutch rider Jacobsen, who made his Tour debut, was involved in the attack on the line but eventually overtook him for fifth on Sunday.

The tour now travels to France and resumes at 171.5 kilometers from Dunkirk to Calais on Tuesday.

The results of the third stage