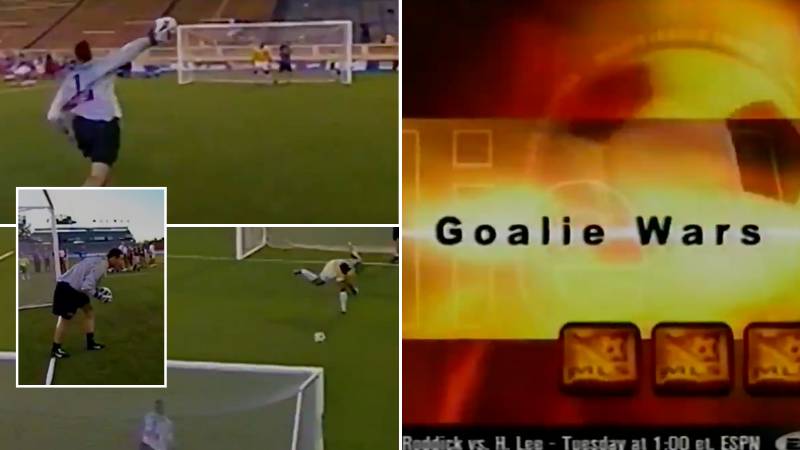 If you haven’t watched Goalie Wars from MLS All-Star before, prepare to have your mind blown.

Back in the summer of 2001, when the San Jose Earthquakes hosted an All-Star Game at Spartan Stadium, three goalkeepers—Joe Cannon, Nick Rimando and Zach Thornton—engaged in one of the most memorable moments in Major League Soccer history.

So what did they do? Well, here’s an official description of the rules:

The goalkeeper from each team competes in a singles match to protect their goal while trying to score on the opponent’s net. Goalkeepers can shoot at their opponent’s goal by throwing, kicking or kicking the ball. The shot must be taken within three steps and six seconds of recovering the ball from the shot. Balls that are not controlled or deviate from the finish line will be returned to the individual taking the initial shot. The player with the most points at the end of each two-and-a-half minute match will be declared the winner.

Before we dive into the results, here are some classic shots of Cannon, Rimaldo, and Thornton playing the “Goalie Wars” clip. Can you imagine bringing this kind of competition to the Premier League?

RT if you think we should bring back the goal wars!

San Jose Earthquakes goalkeeper Joe Cannon, who had more than 100 MLS appearances during his time at the Quakes, turned the show into the night.

He defeated both opponents in the first round before defeating Chicago Fire guard Zach Thornton again in the final.

“I had to play the first two games and I was exhausted, I think I vomited in front of me [television host] Rob Stone, Cannon said MLS Football in the year 2020.

“I think as a young goalkeeper, many of us love this exercise, because it removes any cognitive thinking, making a decision. It’s all about stopping the shot, one on one, Manu Manu, which, I have a twin brother, so that was right up my alley.”

Zach Thornton may have suffered at the hands of Cannon in the “Goalie Wars” final, but he thoroughly enjoyed the competition.

“Joe Cannon and I had a good fight,” he said, “we put in a good show, and we both got in on it. I think any time a goalkeeper has a chance to score, they enjoy it.”

Unfortunately for those in attendance, “Goalie Wars” has been suspended for years to come. But based on the social media reaction in the last hours, the unique competition will be greeted with open arms.

One fan said, “This sounds amazing. So much money and interest on modern footballers, they don’t get involved in things like this anymore. Count the days of Kevin Keegan falling off a bike on Superstars.”

Another commented: “The Premier League should do like an All-Star Weekend,” while a third wrote: “This is how matches should be decided after extra time. No penalty kicks.”

Tell us your thoughts on “Goalie Wars” in the comments.