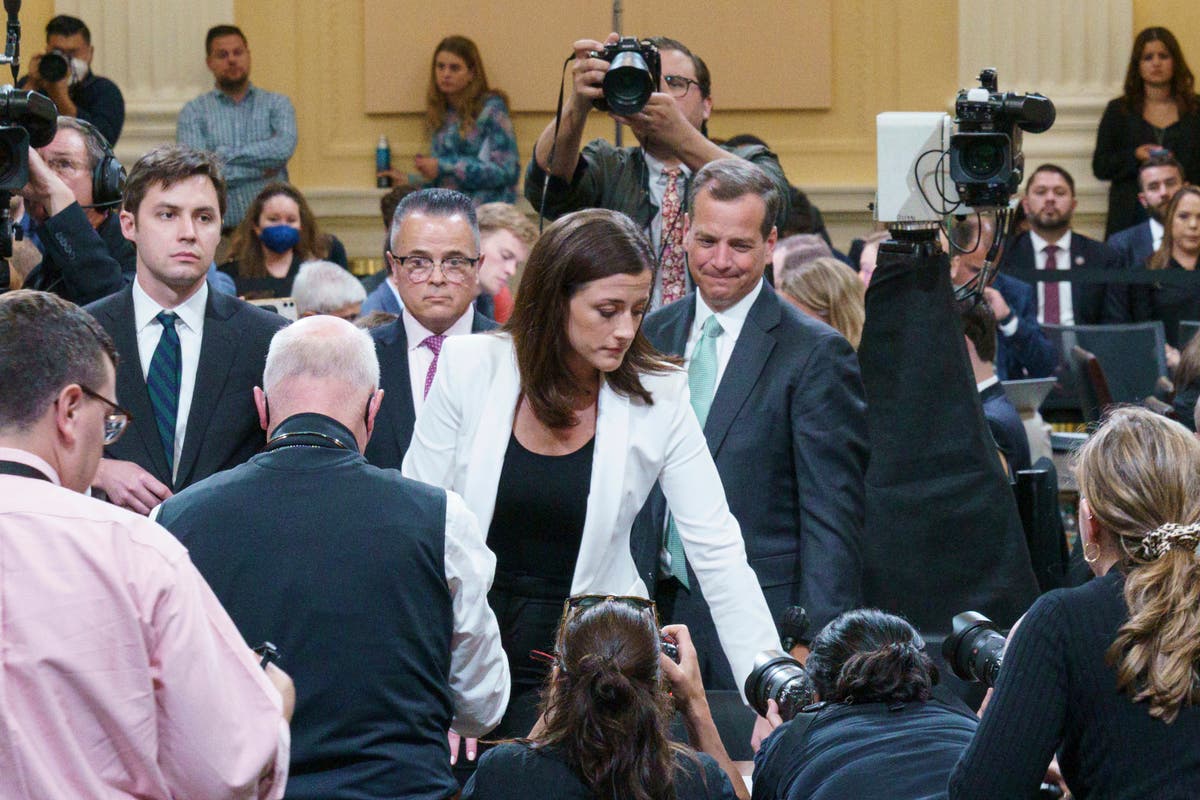 Cassidy Hutchinson stands by her description of the confrontation between former President Donald Trump and Secret Service agents who refused to heed his order to move him to the Capitol during the January 6 riots.

Ms Hutchinson, who served as principal aide to former White House chief of staff Mark Meadows from April 2020 to the end of Trump’s presidency in January 2021, astounded viewers across the United States this week by providing evidence of a variety of outrageous interactions detailing how The twice impeached former president reacted to the worst attack on the US Capitol since 1814.

Her testimony Tuesday before the House Select Committee on Jan. 6 revealed how indifferent Mr. Trump and his top aides were to the violence that occurred during the pro-Trump Capitol attack, among other explosive information.

One anecdote that has come under scrutiny includes Mr Trump’s former deputy chief of staff for operations, Tony Ornato – a Secret Service agent who was detailed to the Executive Office of the President at Mr Trump’s request – and the Secret Service’s protective detailing chief, Robert Engel.

Ms Hutchinson told the select committee how the special agents told her that when Mr. Trump finished speaking at a rally on January 6, he was intent on joining the rowdy bands of his supporters he had urged. March to the US Capitol. In his excitement, he allegedly became physically violent when Mr. Engel told him that his protection details could not allow him to make the 1.8-mile journey down Pennsylvania Avenue for his own safety.

She said agents told her that Mr. Trump first tried to grab the wheel of his armored SUV as it drove to the White House, and told Mr. Engel, “I’m the president. Take me to the Capitol now.” When he was told, again, that the flight would not take place, Ms. Hutchinson said she was told that the president had “jumped” down Mr. Engel’s throat.

In a statement issued Wednesday, Ms. Hutchinson’s attorneys, Jodi Hunt and William Jordan, said the former White House aide “adheres to all of the testimony she gave yesterday, under oath, to the Select Committee to investigate the January 6 attack on the United States Capitol.” .

But the story of Trump’s alleged attack on his bodyguards has been denied source “close” to Protection Agency. Source Claims That Mr. Ornato and Mr. Engel – both of whom remain very close to the former president – “conflict with Trump holding the leash or assaulting a client” but “don’t deny that Trump was angry and telling them to drive to the Capitol”.

Adding to the plot, said Secret Service spokesman, Anthony Guglielmi Politico that Secret Service personnel “were not required to reappear before the Committee in response to the new information yesterday and we plan to respond formally to the record. We have and will continue to make available to any Secret Service member.”

However, it is not clear why such communication was necessary because Mr. Engel and Mr. Ornato had already provided evidence in affidavits with commission investigators.

In response to the mysterious denials, Mrs. Hutchinson’s attorney, Judy Hunt, He wrote on Twitter: “Miss. Hutchinson testified under oath and recounted what she was told. Those who know the episode must also testify under oath.”